During our stand with the Carroll County Progressives on Saturday, August 18, 2007, we noticed a continuing police presence on the roads. We had our stand on a busy 4 way intersection located in Eldersburg, Maryland . We all noticed that the traffic coming from the south was way more appreciative of our signage than any other direction. Most coming from the east were abusive and showed their ignorance by vocalizing their resolve to support George Bush.
We do not view this as a "republican v democrat" issue, we view this as a peace v war issue.
As Margaret, the coordinator of WIB Westminster accurately pointed out, we had a permit wherein they knew we would be there, they knew what time we would be there, and yet, the police chose to round us up, at the end of our "Honk To Impeach" stand.
The full account of the police activity can be seen on the Carrol County Progressives web site.
The video can be accessed by going to the Women In Black Westminster web site
Posted by Black Cat at 9:36 AM No comments:

We Had A Great Honkin Time

Brad Brown organized and promoted a "honk to impeach Bush and Cheney" rally in Westminster on Saturday, July 28, 2007. It was a great success, and we hope to do it again soon!

Thanks Brad, way honkin cool !
Posted by Black Cat at 10:04 PM No comments: 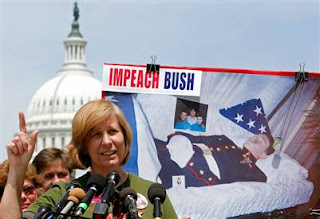 I always knew Cindy Sheehan had a good idea at first. Then, it steamrolled into a farce, as Cindy really never had the support she should have had.
Lets face it, Cindys no Abbie.
A grieving MOTHER could never garner the support a dynamic MAN could. (but a man with the agenda of getting laid more than fighting war.)
So now Cindy is "retiring". Who will take her place? I have no idea.

Goodbye Cindy
“Casey died for a country which cares more about who will be the next American Idol than how many people will be killed in the next few months while Democrats and Republicans play politics with human lives,” she wrote. “It is so painful to me to know that I bought into this system for so many years and Casey paid the price for that allegiance. I failed my boy and that hurts the most.”

Plutonium On The Internet 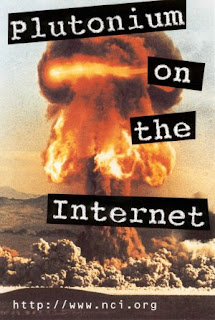 Check out this site, and start thinking about that bomb shelter
Posted by Black Cat at 10:32 AM 2 comments:

Tell the Media About the March - And BE the Media Too

Tell the Media About the March - And BE the Media Too
We know the Corporate Media will give the least possible coverage to this march - just as they have done with every previous anti-war and impeachment event. That means it's up to us to break through the media blackout using every possible strategy to tell the American people that the majority of Americans want peace and impeachment, and we're taking to the streets in huge numbers to tell the politicians in Washington!
Call-in shows (radio and TV) are a great opportunity to reach thousands or even millions. Carolyn Kay has an excellent list of progressive shows with times and call-in numbers:http://makethemaccountable.com/index.php/listening
For extra credit, call a rightwing show using media provocateur Mike Stark's list:http://www.callingallwingnuts.com/wingnut-directory/ Be sure to prepare using Mike's tips:http://www.callingallwingnuts.com/calling-tips/Even more wingnuts shows are listed on the Republican Party website:http://www.gop.com/GetActive/CallTalkRadio.aspx
Posted by Black Cat at 10:02 AM No comments:

ENCAMPMENT TO STOP THE WAR

ENCAMPMENT TO STOP THE WAR In Washington DCMessage to Congress: *CUT OFF ALL WAR FUNDING *END THE WAR *BRING THE TROOPS HOME NOWBeginning March 12 in Washington DC (Before the March on the Pentagon on Saturday march 17)

WHERE? on the mall directly in front of the Capitol building (3rd street between Constitution and Independence)WHY NOW? During the week beginning March 12, Congress will begin voting on Bush’s request for $100 billion more for the wars in Iraq and Afganistan. If Congress votes to cut off funds, they can end the war now and bring the troops home. If they approve Bush’s war funds, the killing, and dying and occupation will go on…it’s as simple as that. This vote will be the most important war related vote since Congress voted to authorized Bush to invade and occupy Iraq in October of 2002. The antiwar movement must be there to let Congress know that we won’t let them get away with it this time.

Right now, the Troops Out Now Coalition is working with local organizers, churches and mosques, unions, and community groups to prepare for a long-term occupation of Washington by the anti-war movement. Local organizers across the U.S. are organizing buses, vans, and car caravans.We have a real opportunity if we act decisively--and we need your help. Please contact us by Monday, February 26 --use the "comments" section of the volunteer form to let us know:

Can you come to Washington for the Encampment to Stop the War? On what day can you join the encampment? For how long? Some are planning to come for a day or two, others are staying longer.
Do you have equipment that would be useful for an encampment (tents, sleeping bags, etc.)??
Can you volunteer to take on a task during the encampment (logistics, medical, security, legal, transportation, etc)?

If you live in the Washington DC area, do you have space for people to sleep or freshen up?
How You Can HelpVolunteer - complete the volunteer form at http://troopsoutnow.org/feb17mar17volunteer.shtml and use the comments section to let us know when you can come to Washington DC, how long you can stay, what you can bring, and what tasks you can take on in the Encampment to Stop the War.Help Get the Word Out - Download leaflets from http://www.troopsoutnow.org/ and take them to your school, workplace, union hall, church or mosque, community center, etc.Donate - http://troopsoutnow.org/donate.shtml - Please help with the enormous expenses of preparing for the Encampment to Stop the War.Contact your local organizing center and help organize your local contingent to the Encampment.

Click This Button
Be Responsible For The
Health And Welfare of Millions
Posted by Black Cat at 10:23 AM No comments: